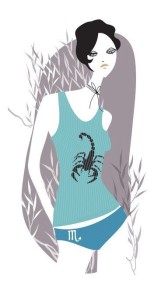 You have strong romantic energies right now. If you are single, a friend may introduce you to someone, but they could just as easily suddenly confess a romantic interest in you themselves. There could be a healing and positive change in your love life.

What makes the timing of the Moon's return to your romantic sector today significant is not just that this will put it here for at least part of the weekend. More significant is that these romantically charged lunar vibes kick in three weeks to the day before Jupiter is due to retrograde back in for a rare double dip visit, with a chance to start warming things up.

If you are single, you may find yourself talking to someone who would normally be outside your area of interest right now. If this person is not the partner you are looking for, they may turn out to know someone - or know someone who knows someone ...

If you are single, you may find yourself talking to someone who would normally be outside your area of interest right now. If this person is not the partner you are looking for, they may turn out to know someone - or know someone who knows someone ...

There is change in the air and especially on the romantic front this month, though to start with this is something that you or at least your heart's over the horizon radar is sensing rather than anything tangible. To start with, while you have the asteroid Juno and dreamy Neptune in retrograde motion in your romantic sector, as they have been for several months now, the focus is more on your relationships. Less because of anything happening on the relationship front and more because of the support that the planets are getting and especially on the communication front and when it comes to friendship and relationship building. While there is reason for confidence on the relationship front, with Uranus in retrograde motion here for the rest of the year there will not be a lot of change. It is on the romantic front that something is brewing, though to start with this will be felt as an increase in a sense of romantic nostalgia. You not only have Juno and Neptune in retrograde motion in your romantic sector but Venus, the planet of love in a nostalgic part of your chart, with a nostalgic trip down love's memory lane still in its early days as you move into the new month. Even the Moon's return to your romantic sector from 7th October to 9th October will see these romantically charged lunar vibes amplify this. However, change is in the air and this will begin to manifest when Venus, the planet of love not only returns to Scorpio on 23rd October but just hours ahead of the Sun and the start of your birthday month and new solar year. With Juno turning direct a day later but Neptune remaining in retrograde motion, the love gods will have the past, present and future covered. However, the real change comes a few days later when Jupiter retrogrades back into your romantic sector on 28th October, opening the doors even wider to the past and second chances.
Purchase E-mail Astro Reading

(The Sun is in Scorpio from approximately October 23 to November 21, depending on the year.) Scorpios are known for their intensity. They are determined folk that absolutely throw themselves into whatever they do but getting them to commit to something is rarely an easy task. In fact, its better not to even try to get them to do anything. Solar Scorpios absolutely have their own mind. And, their primary motivation is unlikely to be prestige (like their Capricorn friends), or even authority (Leos can have that, too)its real power. Their power can absolutely be of the behind the scenes variety, just as long as they have it. To others, Scorpios seem to have plenty of willpower. They probably do. Scorpios do know what they want, and they wont go out and grab it at the wrong moment. They simply sit back, watch (quite expertly), and then get it only when the moment is just right. This apparent patience is simply their powerful skills at strategy at work.

This feminine, fixed and determined water sign clears the way for the big change and rules just the genitals and the colon. Sexual desire and solitude accompany this mystic purple and scarlet auric glow. Scorpios ruling planet, Pluto, causes immediate change and transcends earthly bounds. Scorpio rules the 8th house and all things hidden. Penetrating and inquiring. they search for the truth. Scorpio has the ability to transcend the depths of hell and sing from the heavens. Collectively secretive and hidden, they force you to draw them out, not necessarily because of a great gift but because of a tremendous sensitivity to their environment. Deeply feeling and retaliatory, Scorpio is a formidable enemy to contend with.

They appear powerful but it is actually fear that keeps them motivated. They are slippery and like to utilize other peoples talents to call their own, becoming the middle men of the zodiac. The evolved Scorpios are ascended into the realms of healers and services workers without hidden motive or agenda. Both the men and woman of this sign have tremendous energy manipulation over the sexual realm and when they fancy you watch out, they hold on in any way they can. Scorpio is deeply philosophical and understands all things hidden and every undercurrent, making excellent counselors and doctors. More actors have Scorpio placements in their charts because of their ability to be someone different. We know their down fall is usually blind vengeance. Scorpio isnt afraid of getting their hands (their bodies, their minds) dirty. The darker side of life intrigues them, and theyre always ready to investigate.

Scorpios simply never give up. They have tremendous staying power. Theyre not in the slightest intimidated by anybody or anything. Confrontations are not a problem. In fact, talk to any Scorpio about their lives, and youll probably be in awe at all theyve gone through. Trauma seems to follow them wherever they go. When Scorpio learns optimism, instead of expecting the worst, theyll find that they possess amazing regenerative powers the power to heal, create, and transform.

Scorpio Rising Scorpio Ascendant people have a lot of presence. There is something about them that tells the world that they are not to be pushed around. Their manner commands respect, and in some cases, fear. Scorpio rising people can be quiet or loud, but they always seem powerful and determined. You either love or hate Scorpio rising people- they are rarely people who go through life unnoticed. In fact, some of them are confused when faced with the fact that they get such strong reactions from others. They seem to look right through people, seeing through superficiality. This can be quite intimidating to some, and intriguing to others. Scorpio rising people, in their dealings with others, look for answers by reading between the lines. Surface details are discarded when they are getting a feel for people and situations around them.

Scorpio rising people value their privacy so much, it can border on paranoia. They have a strong need to control their environment and are experts at strategy. Rarely people who will blow their chances with impatience, they plan out their moves carefully and deliberately, relying on their awesome ability to feel out others and situations.Scorpio rising natives are drawn to down-to-earth, natural partners. Reliability in their partner is very important. They generally look for complete commitment and have little patience with flighty partners.

Moon In Scorpio While others may find security and comfort in material things, Moon in Scorpio people seek out emotional intensity. No matter what, there is something very intense about Lunar Scorpios. They are diggers when it comes to the world of emotionthey can see beyond facades and cut right to the core of a person. This ability to see what isnt obvious to the rest of the world can be intimidating to others or wildly attractive, depending on the audience. Their deep-seated need for transformation and rebirth can manifest itself in the lives of Lunar Scorpios in different ways. Most have powerful, emotionally intense lives. Some feel like it is beyond their control these natives seem to attract emotional upheaval, and their lives appear to consist of plenty of dramatic ups and downs. However, when accepted as an emotional need, rebirth and change doesnt need to be so dramatic and overwhelming. In some way or the other, Moon in Scorpio natives seek out intense experiences. If their lives are regular in any way, there can be an unconscious need to test their own strength and stir up emotional excitement. Self-awareness and acceptance is probably the best way to handle this deep need for emotional drama.

Doing things halfway or having meaningless relationships simply doesnt fulfill them. Lunar Scorpios want all or nothing.Moon in Scorpio people often have a strong fear of betrayal. They seek out commitment, and feel the need for a partner to give up something for them. Some will put the people they love through a series of tests, and these are not always conscious. Their apparent suspicion can be trying for the people who love them. However, once committed, Moon in Scorpio people can be the most loyal and protective partners around.Even the shy ones have enormous presence. Their lives are emotion-driven, yet many Moon in Scorpio natives spend a lot of time controlling and mastering their emotions. Their intuition is enormous, although it is sometimes self-serving.

Moon in Scorpio people radiate strength. Even in the absence of experience, they seem to just know things. It would be difficult to shock or scare away Lunar Scorpios in the face of emotional honesty and power. Some people instinctively want to lean on them, and other less brave folk run a little scared. Lunar Scorpios have exceptional radar that allows them to size up a situationand a personquickly and expertly. This ability to understand human motivation and nature can be too close for comfort for some, and enormously comforting for others.Many Lunar Scorpios are intelligent and astute. Those that use their enormous powers for intimacy and honesty are the happiest, and they make the most interesting and rewarding friends and lovers.

Lucky Color: Red Lucky Number: 9 Flower: Peony Herb: Basil Key Phrase: I Desire Life Path: With your profound emotionality, you explore the nature of the Universe. Navigating the outermost reaches of space and the innermost reaches of the soul. Release past pain, old desires and attachments. Focus on your goals and rise again and again out of the fire and into the freedom of the skies.