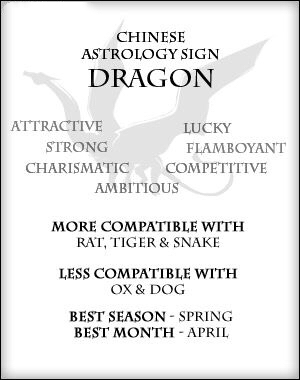 Year of the Dragon

People with Chinese zodiac Dragon sign are usually a group of people who are lively, intellectual and excitable. They can clearly tell right from wrong. They are upright and frank. However, they are also a bit arrogant and impatient. Female Dragons tend to be overly confident. They hate hypocrisy, gossip and slander. They are not afraid of difficulties but hate to be used or controlled by others.