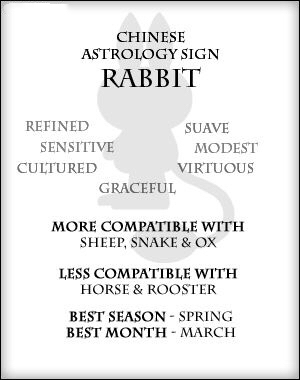 You may find that there is a disagreement with a coworker, business partner, or client that is holding up your career plans at the moment. If you look at things objectively, you may realize that this is nothing personal, it is just a different viewpoint.

You are almost obsessively focused on learning right now. You may decide to start up a new home-study course, order a set of cassettes or books, and spend a lot of your off-time pouring over the books. This may not be a bad thing - it will be good for your self-esteem, for one.
Purchase E-mail Astro Reading

Year of the Rabbit

For Chinese people, the rabbit is a tame creature representing hope for a long time. It is tender and lovely. The moon goddess Chang’e in Chinese legend had a rabbit as her pet, which stimulated the thought that only this creature was amiable enough to match her noble beauty. People born in the Year of the Rabbit are not aggressive but approachable. They have a decent, noble and elegant manner.

People with Chinese zodiac Rabbit sign usually impress others with an image of tenderness, grace and sensitive. They are romantic in relationship, having a high demand in life quality. They avoid arguing with others, and have a capability of converting an enemy into a friend. They are homebody and hospitable, and like house fitting-up. They can work with speed and efficiency, do not insist and get angry easily. But they also like hesitating, which makes them lose many chances.
They have various personality traits based on twelve western astrological signs, like elegant Aries, imaginative Taurus, positive Gemini, sentimental Cancer, wise Leo, cautious Virgo, suspicious Libra, calm Scorpio, self-esteemed Sagittarius, prudent Capricorn, bookish Aquarius and creative Pisces.